To learn more about ancient Lycia and the following Lycian sites (including more photos), visit our extensive website at www.lycianturkey.com

The capital city of the Lycian Federation and its greatest city for most of Lycian history.  Xanthos stands atop an elevated area within the Xanthos valley with the Xanthos River flowing closely under the citys west side. From this elevation one receives a supreme view of the valley surrounded by the spectacular Taurus Mountains.  Many interesting things are seen here, such as the “Harpy Tomb”, “Xanthian Obelisque” and a very unique pillar tomb, as well as an amphitheatre, a Roman arch, a Byzantine church with lovely mosaic floors and a fortress at the top of the acropolis.  Xanthos is on Unesco’s World Heritage List. 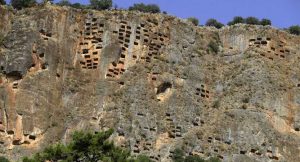 There is no other Lycian site quite like Pinara with its untouched, gorgeous mountain setting of fragrant pines, two thousand year-old olive trees, many wildflowers and herbs and its stunning view of the Xanthos valley. Because of its remoteness, Pinara remains undiscovered by most people and so retains its tranquil and (truly) mystical atmosphere.  The city sits perched high on a mountain reached by a twisting track road and gives one an unparalled eastern view far across the Xanthos valley.  It is towered over by a more than two thousand foot high flat-topped mountain cone honeycombed with hundreds of rectangular burial tombs on its vertical east face. This round cone is the acropolis of Pinara and from this the city received its name, “Pinara” meaning “round” in the Lycian language. Below the acropolis spreads the city, stretching over long terraces which extend in three directions.  Features of Pinara include several temples, many large tombs including the “Royal Tomb” and a Greek-style amphitheatre. 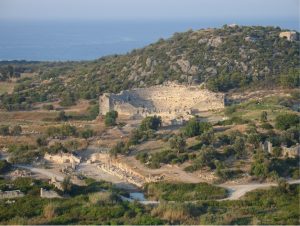 Patara was the major port of Lycia, located at the mouth of the Xanthos River, until it silted up and turned into a malaria-plagued marsh.  It was a very wealthy city due to trade and was one of the six principal cities of Lycia. Following its capture by Alexander the Great it became an important naval base as well.  Pataras oracle at the renown temple of Apollo (not yet found) was said to rival that at Delphi.  In Christian history Patara is famous for being a place of St. Pauls missionary work at the end of his third missionary journey as he changed ships on route to Jerusalem.  Patara was also the birthplace of St. Nicholas (c.300 AD), bishop of Myra and the future Santa Claus.

The structures at Patara now visible include a splendid Roman-type triple-arched triumphal arch in excellent condition, many sarcophagi, a bath complex, Byzantine basilica, ancient main road, amphitheatre and the large Granary of Hadrian.

Patara beach should not be missed with its gorgeous landscape and great swimming.  It is a national park and home to many birds, also the breeding ground of the endangered Loggerhead turtle. The beach is an 12 kilometer-long strip of sand bordered on its ends by mountains and along its length by sand dunes and the large marshy area which once was the celebrated harbour of Patara. 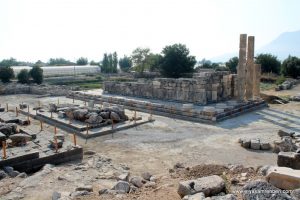 Letoon was the sacred cult center of Lycia and its most important sanctuary dedicated to the three national deities of Lycia – Leto and her twin children Apollo and Artemis.

Letoon was a sanctuary precinct and not actually a city, though it did have a settlement surrounding it.  This was the spiritual heart of Lycia, its federal sanctuary and the place of national festivals.  It survived through Byzantine times, perhaps the 7th century AD when Lycia was ravaged by Arab attacks and the area started to silt up with sand brought by the Xanthos River.

The Lycian cult of Leto with its spiritual centre at Letoon was one of the many forms of the wide-spread mother-goddess religion that originated in ancient Anatolia and spread throughout the ancient world.  It is noteworthy that a woman was allowed to preside over the national assembly that was held each autumn at Letoon – a reminder of the ancient matriarchal customs in Anatolia. 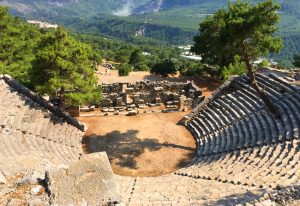 Arycanda, one of Lycia’s best-kept secrets, is a very unique Lycian city, built upon five large terraces ascending a mountain slope.  It was known for having the most pleasure-loving (and debt-ridden) citizens.  The city overlooks a magnificent valley and its view makes it one of the most spectacular sites in Lycia.  Some features of this magnificent city include the largest bath complex in Lycia, monumental kings’ temple tombs, agora, amphitheatre, odeon and an unusual stadium on the top terrace of the city. 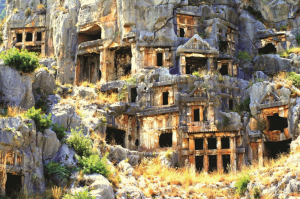 Myra has a long history and was one of the most important cities in Lycia. In Roman times Myra was on the sea and was the port where St. Paul changed ships on his way to Rome in about 60 AD.  The city is well known for its amphitheatre (the largest in Lycia) and the plethora of rock-cut tombs carved in the cliff above the theatre.  Constantine made Myra the capitol of Lycia as well as a bishopric.  St. Nicholas was one of Myra’s early bishops in the 4th century AD, famous for his miracles and known for his kindness.  The Church of St. Nicholas in nearby, inside of which is the sarcophagus of St. Nicholas although his remains were taken to Italy during the Latin Crusades of the 11th century. 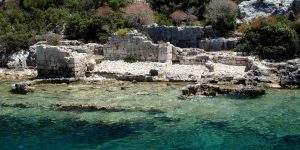 Kekova-Simena is a very popular Lycian site, situated upon one of the most attractive spots of the Turkish coast and a day trip here makes for an interesting and very relaxing tour. The name “Kekova” is Turkish for “plain of thyme” and describes the area of and around the ancient Lycian sunken city of Simena.  A charming mix of ancient, medieval and modern history makes Kekova-Simena interesting as well as beautiful.  In ancient times Simena was a small fishing village, later a Crusaders outpost of the Knights of St. John and now the sleepy fishing village of Kale.

The ancient city of Simena was once of two parts – an island and a coastal part of the mainland.  On the mainland the charming village of Kaleköy (“castle”) stands today, its buildings mingling with ancient and medieval structures.  At the top of the village sits a well-preserved crusaders castle built partially upon ancient Lycian foundations. Inside the castle is the smallest amphitheatre of Lycia. At the eastern end of the village is a cluster of some very nice sarcophagi overlooking the sea and surrounded by ancient olive trees.  Near the harbour of Kaleköy is another sarcophagus, popping up from the water.  Across the bay, along the island, are the half-submerged ruins of the residential part of Simena, caused by the downward shift of land by the terrible earthquakes of the 2nd century AD.   Half of the ancient houses are submerged and staircases descend into the water.  Foundations of buildings and the ancient harbor are also seen below the sea. 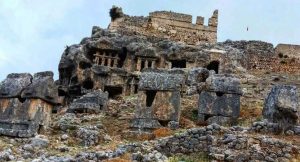 Tlos is the “home of Pegasus” with excellent rock-cut tombs and an acropolis from which one receives stunning 360 degree views over the Xanthos valley and mountains (not a difficult climb).  Features include: the “Tomb of Bellerophone”, castle of notorious Ottoman feudal lorb “Bloody Ali”, amphitheatre and the remains of a Roman gymnasium and two baths. Inside the largest bath is the “Yedi Kapý” ( “Seven Gates”), a dramatic set of seven arches overlooking a lush valley.

The driving distance to these cities is from a few to several hours, but well-worth the journey. 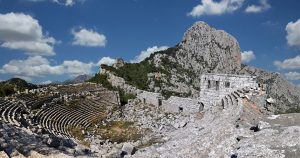 Termessos National Park (2 hours from Kalkan) is the site of one of the highest ancient cities of Turkey and a very special place. Termessos is located at the top of a high mountain and a winding road takes you to the top through spectacular protected wilderness.  Some of the most scenic ruins of Termessos (especially the amphitheatre) are built upon a cliff topped with mist which evokes a very mystic feeling.  The ruins here are both amazing and very well preserved, most notably a large score of rock-cut sarcophagi.  It is believed that Alexander the Great struggled hard to conquer this city, and when one gazes up at its height from below one wonders why he ever would have tried. 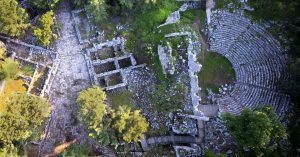 Phaselis is a very attractive ancient site near Antalya, situated between Lycia and Pamphilia.  Tucked in a pine forest, Phaselis has two harbours on the sea and one of the largest bath complexes in southern Turkey.  Phaselis was once a centre for the slave trade and suffered much from piracy before the Romans cleaned up the sea.

This is generally a two day tour including an overnight hotel stay in Pamukkale and is a great tour to see another region of Turkey.

Ephesus is the largest ancient city in Asia Minor with at least 10,000 years of history.  Its Temple of Artemis is one of the Seven Wonders of the Ancient World and it has the largest amphitheatre in Anatolia (where St. Paul gave his famous speech to the Ephesians).  The famous two-tiered Celsus Library is here.  Ephesus is also known to be the meeting place of Cleopatra and Antonius.  The city has been well restored and its many reconstructed ruin are very impressive.

Pamukkale “Cotton Castle” is the name given to this curious natural wonder at the ancient site of Hierapolis where Romans would take their holidays to visit the healing thermal springs.  Water from a large thermal spring flowing over a plateau’s lip has formed large travertines, or irregular shelves.  Mineral deposits have accumulated and left a wonderful veneer of translucent crystal on these ledges.  Pamukkale is also the site of ancient Hierapolis, the city   Wander among the many haunting large rock-cut tombs at the necropolis of Hierapolis.

Aphrodisias is a large ancient city in Aegean Turkey.  Named after the goddess Aphrodite it is the site of one of her most important sanctuaries to which pilgrims once flocked.  Excellent marble statues of all kinds were created here as the city is situated under a large mountain quarry.  A museum displaying these many beautiful sculptures is nearby and is well worth a visit.  Aphrodisias is also the home of the largest ancient stadium in Turkey.